In its original incarnation as the Hinsdale Health Museum in 1958, the Robert Crown Center sprang to life from the minds and hearts of people who wanted to enrich their community’s health education. It functioned in that incarnation until the 1960s ushered in a new mindset among parents and educators who wanted to respond to the social and political climate created by the Vietnam War, Civil Rights protests, and the sexual revolution. Although sex education wasn’t mandated anywhere in the country during those decades, change was brewing in American’s attitudes about sex. As early as the 1920s, celebrities and artists had begun to question the traditional views of sexuality perpetuated by Christianity. It wasn’t until the 60s and 70s, however, that sexual “liberation” reached the mainstream. Once considered the highly personal and private domain of family and faith, sexuality now became a topic fit for public conversation. Sociologists and other scientists affirmed that sexuality was a normal physical and emotional part of human existence and that repression of dialog around it could lead only to a continuing rise of sexually transmitted disease and unplanned pregnancy.

During this time, in the late 1960s, The Robert Crown Center for Health Education (RCC) was making transitions of its own. The organization had begun to recognize that a broader and more intensive style of health education would be necessary to impact the health of youth in metropolitan Chicago. RCC’s leadership was formulating plans to expand into a larger space and to create programs to address emerging health concerns. RCC had been teaching students about body systems, but this era would witness a growth in programming that included a comprehensive exploration of the reproductive system. Although many heartland families were apprehensive about bringing sexual health out of the home and into public schools, most welcomed the more thorough and scientific approach to reproductive health education. 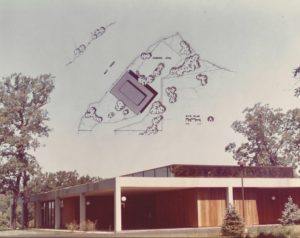 In 1974, the organization made its move to Salt Creek, becoming the nation’s first fully independent health education center.  In appreciation of funding received from the Robert Crown Family, it was distinguished by the moniker it has had now for more than 40 years.

Throughout the 70s, sexuality education continued to grow in importance, supplementing the general health programs the center had been known for.  The environmental movement had been gaining government support and, in the 1970s, the U.S. government passed an abundance of significant environmental legislation:  the Clean Air Act (1970), the Water Pollution Control Act (1972), the National Environmental Policy Act (1970) – which established the EPA, the Endangered Species Act (1973), the Safe Drinking Water Act (1974), and the Clean Water Act (1977). In 1975, in prompt response to the community’s demand for a safer, cleaner environment, the Robert Crown Center introduced an Environmental Education curriculum to teach young people the importance of conservation and ecology.

The 60 and 70s were considered the heyday of illegal drug use. In 1969, Gallup performed its first drug-related poll, which reported that 48% of the country considered drugs a serious threat in their communities. By the mid-70s, “the war on drugs” was in full swing, employing scare tactics that verged on outright lies; no slogan was too extreme if it might deter a teen from using. Students were told that use of marijuana caused acne, blindness and sterility. 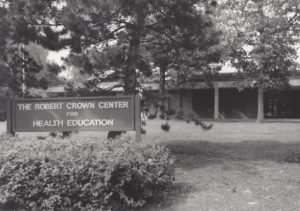 The Robert Crown Center for Health Education joined the masses in expressing concern over the prevalence of illicit use. The organization implemented its first substance abuse prevention program in 1972, but focused its curriculum on brain development and the science of addiction. Over the coming decades, drug trends changed and the demographic of the user shifted, but the science behind drugs (SBD) stayed the same. As a result of its solid foundation, what came to be known as the SBD program was able to inform young people’s decision-making and impact health. Over many years, the program evolved with prevailing neurology research and changing trends while staying true to science and facts.

The early 80s introduced the AIDS epidemic. Science had responded to an increase in STIs with penicillin. It responded to increasing rates of unplanned pregnancy with the birth control pill, condoms, and legalized abortion. These so-called “solutions,” however, were unsavory to the general public. Only prevention education presented an opportunity to reduce health problems related to sexual risk taking and substance use, without the unpleasant consequences of trial and error. In the case of AIDS, a cure was not quickly forthcoming. The Robert Crown Center responded in 1985 with AIDS prevention programming, combatting hysteria with science. The AIDS prevention programs dispelled myths associated with the disease, teaching the causes and consequences of HIV/AIDS from a medical perspective.

In 1987, RCC took its show on the road, meeting more students in their own space, increasing the organization’s impact in 8 counties. Once considered a field trip destination, now RCC contracted with schools for its health educators to deliver their health education expertise in the classroom. The 80s health and fitness craze was sweeping the nation, bringing Americans into a frenzied health consciousness. The addition of an in-school delivery model, combined with increased attention to health, contributed to a huge growth in customers for the Robert Crown Center. Between 1983 and 1993, the organization more than doubled its impact, delivering health education to approximately 215,000 students annually. 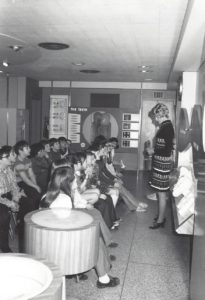 In 2001, the organization opened a satellite center in Chicago’s Homan Square neighborhood where the under-served population had limited learning opportunities. Most metro-Chicago schools were able to pay for some portion of their RCC health educators’ curriculum and travel expenses, but the Homan Square community received their programming 100 percent free of charge.

Early in the new millennium, America’s Surgeon General demanded attention for the nation’s obesity epidemic. Suspected causes of the epidemic spanned a 30-year lifestyle shift and included the increasingly sedentary nature of most professions, the growing prevalence of convenience foods and the abundance of marketing surrounding them. Although the government began work to counteract obesity and its dozens of related illnesses, the rate of obesity continued to rise. By 2010, 60% of Americans were overweight or obese. Particularly alarming was the obesity rate among youth. In 2011, The Robert Crown Center launched its obesity prevention program, FIT, designed to teach elementary school-age children the causes and consequences of obesity.

Throughout these years, RCC had continued to evolve and deliver its Science Behind Drugs curriculum.  Misuse and abuse of opioid pain pills was contributing to a nationwide heroin epidemic and the Chicago metro-area saw its share of tragic addiction and death as drugs were distributed easily along Interstate 294, also known as the “heroin highway.” RCC was addressing an assortment of drug risks and effects in its existing programs, but in 2009 the Roger Hruby Family of Burr Ridge made a generous donation to the creation of an all-new program that was to be heroin centered. Like many others, the Hrubys had lost a beloved family member to the disease and were committed to combating the heroin epidemic. This new program introduced online, interactive components to enable a far greater audience to access the curriculum. 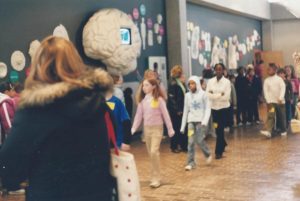 As the delivery of programs continued to shift to an in-school delivery model, RCC leadership sought ways to take advantage of the model’s growing popularity to secure the organization’s long-term sustainability. Through generations, the organization had grown and thrived by responding to changing times and shifting community needs. This would be just one more in its long history. In 2017, the organization announced that it would shift delivery entirely to the in-school model; part of a multi-point plan that would modernize the organization while honoring its tradition and impact. The 4-decades old building was listed for sale and the staff – reduced by 30% — was moved to a more modern office space where resources could be directed to students and curriculum, and away from maintenance and administrative costs. Around this same time, the organization served its 6 millionth student. Much had changed from the first RCC student to the 6 millionth, but much stayed the same: commitment to health, youth and the community. RCC had evolved from health museum to comprehensive health education center; from destination to outreach education provider. As the 2017 fiscal year closed on a leaner, more digitally savvy and modern organization, the Robert Crown Center for Health Education continues to behave responsively, providing prevention education solutions for families and children.