Candor Health Education > News > A Record the U.S. Would Rather NOT Break by Rose Tenuta, M.S. Ed., Ed.S. 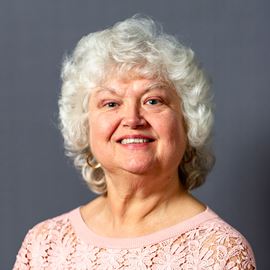 As 2018 draws to a close, it is predicted to be another record-breaking year.  Unfortunately, this is not a record the United States wants to break:  Sexually transmitted infections are again at an all-time high for the fourth year in a row.  While sexually transmitted infections (STIs) have plagued humans for centuries, many scientists at the Centers for Disease Control (CDC) have new and serious concerns.

STIs may be caused by bacteria or viruses. Infections caused by bacteria are generally able to be treated and cured with the use of antibiotics. However, many physicians at the CDC are very concerned about antibiotic resistance – when bacteria develop the ability to survive even when the patient takes antibiotics.  The World Health Organization has studied 77 countries and reports that gonorrhea bacteria are becoming increasingly resistant to the antibiotics used to treat the infection.  Studies show that in 2013 only 1% of gonorrhea bacteria were resistant, but in 2017 the number rose to 4%.  Very few antibiotics are in development that can kill the resistant forms of the infection. 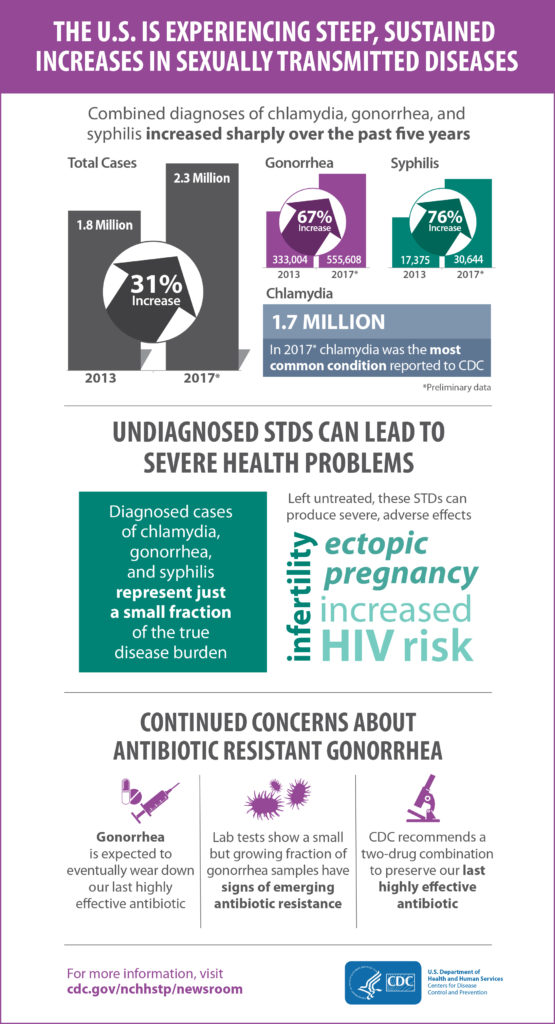 While this is not an immediate concern, it is a trend that is a bit unsettling considering the recent statistics. The total number of cases of chlamydia, gonorrhea, and syphilis has increased more than 31% in the past 4 years.  Of the three, chlamydia represents the greatest number of cases, rising from a rate of 251 cases per 100,000 in the year 2000 to 529 per 100,000 in 2017. The rate of gonorrhea, the second most common bacteria, has more than doubled from 2013. While chlamydia and gonorrhea often show no symptoms in females and sometimes show no symptoms in males, if left untreated these infections may progress to pelvic inflammatory disease in females (a potentially life-threatening condition) and infection of the male reproductive organs, with both complications potentially leading to infertility.

Syphilis has increased by more than 5 times since the year 2000 when it was at an all-time low (5,979 cases). Unfortunately, in 2017, there were 30,644 people infected. While syphilis is easy to test for and treat, it is a very serious disease in pregnant women.  Pregnancies may result in a miscarriage and 40% of fetuses with syphilis carried to term are stillborn.  Those that survive may be born blind, deaf, neurologically damaged or suffering from bone deformities and internal organ damage.  A mother has an 80% chance of passing the bacteria to her unborn baby if left untreated, and sadly the number of infected newborns has increased from 362 cases in 2013 to 918 in 2017.

Another serious concern is that of the approximately 2 million new STI cases this past year, about 50% of them occurred in young people between the ages of 15 and 24.  While studies show that teen pregnancy is declining, many young people do not realize that sexual activities beyond intercourse can also transmit the viruses and bacteria that cause STIs.  What could be the cause of these growing numbers? J. Dennis Fortenberry, president of the American Sexually Transmitted Diseases Association, reports that he and other clinicians believe that funding cutbacks for both prevention education and healthcare are to blame. Professionals say comprehensive sex education, early and often—is a great start. If someone is worried about his or her own personal sexual health, they recommend people get tested and educate themselves about the actual risk factors for sexually transmitted infections.

Considering that about 1/3 of all persons with an STI do not show symptoms, sexual partners are at risk if they do not know the health status of their partners. It is imperative to be aware of the different types of sexually transmitted infections, how they are transmitted and understand that the absence of symptoms does not necessarily mean an absence of infection.

Read more about it:

Popular Science, Sexually transmitted diseases are at an all time high (again). But why? ,  https://www.popsci.com/sexually-transmitted-disease-increase