In 2010, the U.S. Census Bureau found that there were approximately 2.8 million people under the age of 15 who had a physical, intellectual, or emotional disability.2 People with disabilities are often excluded from sex education programs in schools but should have access to these programs. 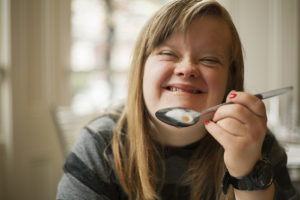 Nevertheless, below are some general guidelines sexual health educators can follow for teaching sex education:2

Young people with intellectual disabilities often lack the knowledge needed to develop their sexual identities because resources for sexual health education have not been adequately provided to this segment of the population. Studies show 69% of individuals with severe intellectual disability have experienced some form of sexual abuse.3 Women with developmental disabilities are particularly vulnerable as the U.S. Department of Justice found 68-83% of women in this group had been victims of sexual assault.3 The National Crime Victimization Survey concluded an average of  59,000 adults with disabilities are raped or sexually assaulted each year, and approximately 50% of all adults with intellectual disabilities will have endured ten or more incidents of sexual abuse in their lifetimes.4 These data are alarming considering individuals with disabilities also experience high rates of mental, emotional, and physical abuse when compared to the general population.2

Intellectual and developmental disabilities are often conflated. There is a difference between these two conditions though they tend to be diagnosed in individuals before the age of eighteen.

Sex education for young people with developmental and intellectual disabilities is very important. These links will provide you with some valuable resources for teaching sex education to this vulnerable population:

It is often difficult talking to young people with disabilities about sexual health. However, the conversation will likely keep our young people safe from sexual assault and help them to develop into sexually mature adults.

PreviousTeen Vaping Rates on the Decline
NextDifferent Viewpoints: How Sex Education (or the lack of) Translates to College Campuses