Candor Health Education > News > So, What is Synthetic Marijuana? by Lance Williams

On August 17, 2018 more than 100 overdoses in New Haven, Connecticut were attributed to synthetic marijuana – also known as K2, spice or “fake weed”.  In our very own state of Illinois (as of May 2018), the Illinois Department of Public Health has 164 documented cases across 15 counties tied to outbreaks related to synthetic marijuana.  Of the 164 documented cases, there have been 4 deaths.

So, what is synthetic marijuana?  According to NIDA (National Institute on Drug Abuse), synthetic marijuana is a human-made mind-altering combination of chemicals that are either sprayed on dried, shredded plant material so they can be smoked or sold as liquids to be vaporized and inhaled in e-cigarettes and other devices. 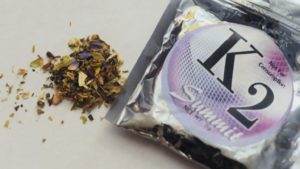 The CDC notes that users of synthetic marijuana have reported feelings of elevated mood, relaxation, altered perception, symptoms of psychosis and addiction.  Individuals who have received emergency room help have shown severe effects like rapid heart rate, vomiting, violent behavior, suicidal thoughts and internal bleeding.  But again, consumers never really know exactly how they may respond to the synthetic marijuana they are using because the chemicals that are being consumed are continuously changing from batch to batch.

With the ever-evolving world we live in, it is crucial that we all continue to educate ourselves and our youth on the potential dangers of experimentation.  There is not one correct answer to preventing youth from using drugs, but research has continued to show that parents/guardians have the greatest influence.  Just having a conversation today can possibly be all that a child needs to deter them from experimenting tomorrow.